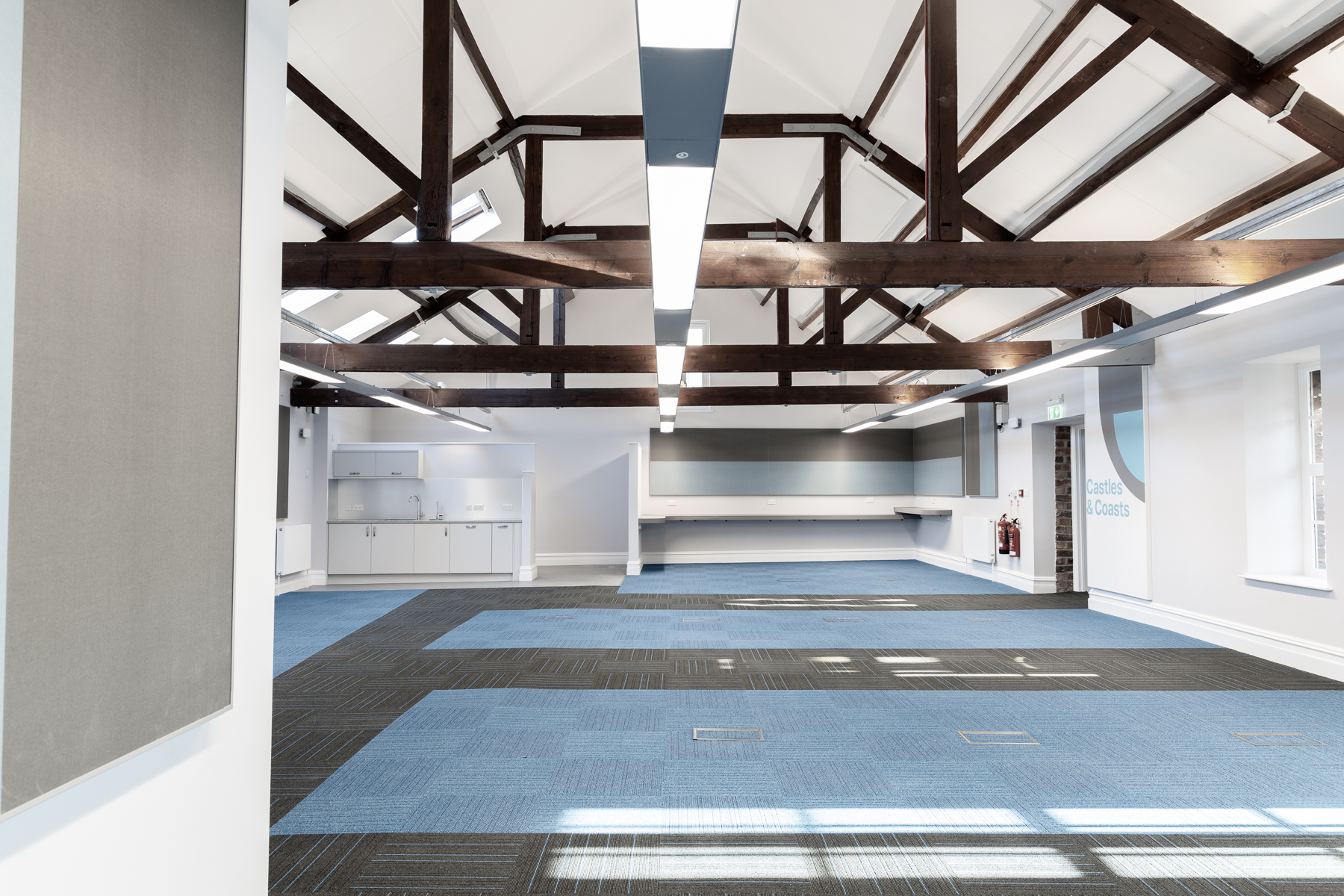 We handed the keys back to Castle and Coast for their newly refurbished head offices on Paternoster Row in Carlisle this month. Providing modernised open plan office spaces, meeting rooms, kitchens, washroom facilities and the addition of a steel framed atrium.

This 46-week building refurbishment programme included the extension of a grade II listed building. Our client’s vision was to open-up the building in several areas enhancing the flow of the space. We worked alongside archaeologists during the initial stages while foundations were being dug to allow new steelwork supports to be added, providing space and support for a the large openings to be formed. While the archaeologist was busy in the ground the structural engineers were busy overcoming access restrictions that typically comes with town centre work. As a result, several pieces of steelwork were re-designed to allow shorter pieces of steel work to be used in the new roof construction.  Most materials that were used on this project had to be transported through the two front doors, this was no easy task. Innovative problem solving had to be used to allow concrete lintols to be used on the first floor with specialist plant employed to lift the lintols through the windows.

With new kitchen and toilet facility’s the Castles & Coast staff can now enjoy the many new offices and meeting rooms that are furnished in part by Cubby Joinery with new benching in several areas and a reception desk fitted with all mod cons by JJ Group who worked alongside us throughout the project.

The Architect, Victoria, from Architects Plus was on hand throughout the project allowing any changes the client felt necessary to enhance the character of the building, to be made quickly and seamlessly.

“Paternoster Row was a difficult project due to its city centre location and historic nature, but I can honestly say the contract has gone really well between all parties to achieve a great end result on time and on budget.”

Additional sustainability works included the reinforcement of the 200-year-old roof, allowing for the addition of Solar Panels. New timber purlins were installed beneath the old rafters to help support the new panels.  Installation of new secondary glazed windows, also manufactured in our joinery workshop, supplemented the new internal walls that were built behind the existing brickwork. These were several inches thick and filled with insulation to help improve the “U” vale of the building. This helps prevent heat loss and cuts fuel bills. The bonus to the environment is by doing this the building reduced its CO2 emissions by approx. 5 tonnes per year!

Transforming a space that was once the old yard into an internal office space provided the client with a splendid open feel area that is complemented through the addition of a new glass atrium allowing maximum light through the roof. A solid glazed wall running two stories high also enhances the areas appeal.

The project engineers were Engineer A L Daines and a special thank you to the sub-contractors, Lee Glover, Decke, WWWindows, A&W Irving and Contract Flooring.

For more information visit the project.